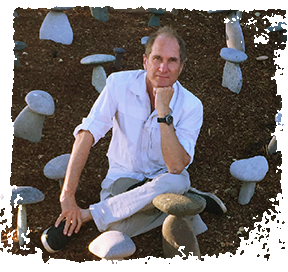 Ganga White is the founder of the White Lotus Foundation and is recognized as an outstanding teacher and exponent of Yoga. He has been called one of the “architects of American yoga” and a “pioneer of yoga” by the Yoga Journal. Since 1967 he has made many valuable and enduring contributions to his field. Ganga is one of the early developers of Flow Yoga, creator of Partner Yoga in the 1970’s, and with his wife Tracey Rich, released the #1 internationally best selling Total Yoga videos--with sales over 1.8 million.

Ganga White founded his first Yoga center on Sunset Boulevard in 1967 which became nationally known. He has extensive background in health, science and philosophy with teaching experience spanning over forty years. He has trained thousands of Yoga teachers, studied and lived in India visiting remote monasteries and learning centers, and teaches internationally. He founded Yoga centers in major U.S. cities and for five years, served as vice-president of the Sivananda Yoga organization. He has received the teaching title, Yoga Acharya, three times from the Sivananda Ashram, the Yoga Vedanta Forest University, Rishikesh, Himalayas, and the Yoga Niketan in India. He had years of personal study with many great teachers including Swami Venkatesananda, J. Krishnamurti and BKS Iyengar, Joel Kramer, and K. Pattabhi Jois. In addition, his work and achievements have earned him the rare, honored title Yogiraj, "king of yogis." Ganga’s text, Double Yoga, introducing partner yoga was published in 1979 by Viking-Penguin.

Though he has been honored with the sacred title, Yogiraj, and has a Sanskrit name, Ganga is a critical thinker who questions authority, outmoded beliefs, and dogmatic systems. His teaching empowers the individual while retaining the essential truths of Yoga. Ganga has stated, "I am very concerned with awakening the mind as well as the body. Yoga is far more than simply a healthful exercise system. The most important purpose of Yoga is to bring about a deep transformation of the individual - an awakening of intelligence that is free of dependencies and romantic beliefs and ready to meet the accelerating challenges of the 21st century." His newest book presenting a fresh, new and contemporary vision of yoga, is titled Yoga Beyond Belief - Insights to Awaken and Deepen Your Practice.

Tracey Rich is a director of the White Lotus Foundation. She has been serving the organization through her teaching and in the design and development of their Santa Barbara Retreat Center since its inception in 1983. Tracey has been studying and teaching nationally since 1978, training teachers as well as students. Her background in Yoga includes study with many teachers including K. Pattabhi Jois of the Astanga Vinyasa tradition, Yogiraj Ganga White, Yogini June LaSalvia, and J. Krishnamurti. Her background also includes writing, dance and related movement, health and philosophy. She draws her teaching methods from all of these areas; creating a synthesis of experience and hoping to inspire self-expression in the student, giving them the tools to develop well being and awareness in their lives. She focuses her teaching of Vinyasa Yoga on freedom, creativity and the importance of refining subtle energies and the breath. "The asanas become a dance with the dance moving out into all areas of life."   Tracey is holder of the Yoga Acharya degree.

Tracey conducts with Ganga White, the sixteen day Yoga teacher training courses at their residential retreat center in Santa Barbara. The course has received international recognition and graduates have successfully started centers and classes all over the world. She and Ganga White regularly lead seminars at other centers worldwide. They created together the internationally #1 best selling videos, Aerobic Yoga, the Flow Series, Total Yoga, and the Total Yoga Series, Earth, Water, and Fire. The Original Total Yoga has been in the top ten Yoga videos for ten years running, with over 1.6 million videos sold. Tracey was featured on the cover of Yoga Journal in the July, 2002 issue.